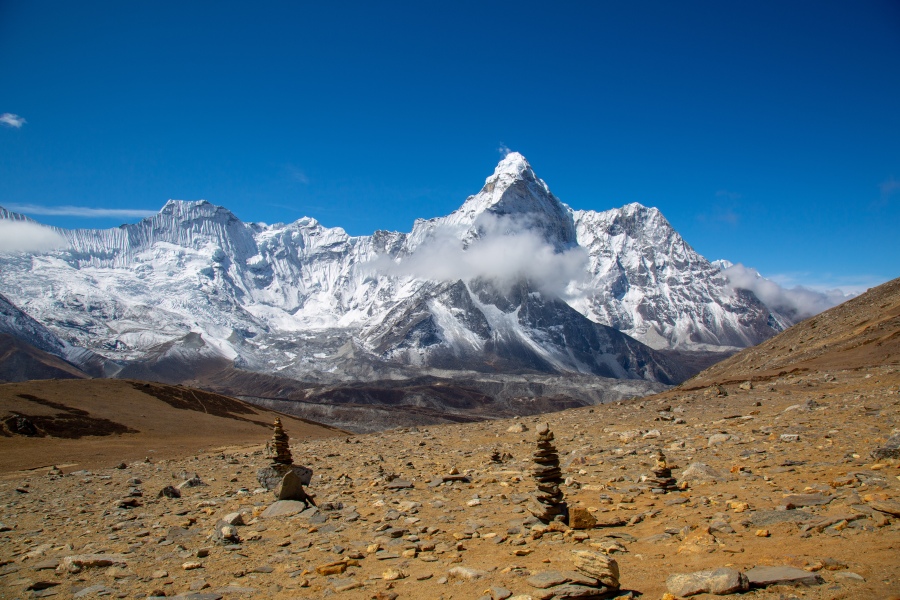 “Higher in the sky than imagination had dared to suggest, the white summit of Everest.”

In 1921, high on the mountain slopes above the Tibetan hamlet of Khampa Dzong, below steel grey skies and in biting winds, an expedition plodded their way ever higher into the Himalayas. Amongst the first of many, they had come to survey and plan a route to climb Everest. Turning to gaze over the valley from where their journey had begun many days prior, they saw the mountain for the first time. Amongst them was George Mallory, who would tragically die whilst attempting to summit Everest just three years later. In his book Climbing Everest,he wrote of seeing Everest for the first time. “There was no mistaking the two great peaks in the west: that to the left must be Makalu, grey, severe and yet distinctly graceful, and the other away to the right – who could doubt its identity? It was a prodigious white fang excrescent from the jaw of the world.”

Everest. The name still reverberates with a certain air of mystery and adventure to this day. Ever since being conquered by Edmund Hillary and Tenzin Norgay in 1953, the mountain continues to lure climbers to attempt the bottle-necks, ravines, sheer cliff-faces and glaciers of the worlds highest peak. Adventure often comes at a deadly cost. The number of deaths on Everest alone is unknown, but stands somewhere around 300. The peak is so unforgiving that often the bodies of the dead cannot be retrieved, serving as grim markers for climbers pushing for the summit. Indeed, George Mallory’s body, which had lain undiscovered on the slopes of the mountain for 75 years, was not found and buried until 1999. The body of his climbing partner, Andrew Irvine remains missing to this day.

One of a team of nine, along with sherpas and porters, Mallory successfully charted a northern route during the 1921 British expedition to Everest, high on the north col of Everest. Being unprepared, they climbed to a height of around 23,000ft before being forced to descend whilst detailing as much of the route as possible in the hopes of a further expedition. Dressed in tweed, knickerbockers and Norfolk jackets, the members of the expedition were a far cry from the high-tech equipment used by contemporary climbers, many of whom still succumb to the dangers high on the mountain.

A recent exhibition hosted by the Royal Geographical Society, Everest: A Reconnaissance documents the 1921 expedition through a series of platinum prints taken by members of the expedition, including Mallory. The expedition was assembled and undertaken in order to document and assist in the surveying of viable routes and staging areas for a future attempt on the summit of Everest. Featuring some of the first panoramic images taken of high mountain ranges, under extreme and challenging conditions, the photographs are testament to the grit and determination in the early stages of the quest to conquer Everest.

Speaking of the exhibition, Alasdair Macleod of the Royal Geographical Society detailed its roots. “The images in the exhibition are from the Society’s 20,000+ images of Everest linked to the eight successive expeditions, under the aegis of the ‘Mount Everest Committee.” It may be one of many, as Alasdair told me. “We are planning to newly digitise the archive over the coming years, to mark the upcoming centenaries for the expeditions. 1921 followed by 1922 and 1924, where the photographer John Noel also makes the first film of the mountain.”

Mountaineering – whether it be on Everest or not, is seen by many as a representation of mankind’s desire to conquer, and overcome challenge and adversity. But why so we place so much prestige and emphasis on the climbing of mountains? Keen climber, Søren Jepsen explains what drives him in part. “The feeling of accomplishment is a massive kick. Having walked/trekked/climbed for several days, often in harsh conditions and finally reaching the top is a huge rush, and makes all the training worthwhile.” Like any sport, extreme or otherwise, the sense of accomplishment following weeks and months of preparation is the real prize. Edmund Hillary famously said: “It is not the mountain we conquer, but ourselves.”

“These were like the wildest creation of a dream.. Gradually, very gradually, we saw the great mountain sides and glaciers and arêtes.”

Climbing expeditions can transform from being controlled and routine to unprepared and dangerous in seconds. Søren tells me of an experience during a climb on Mera Peak, itself in the Himalayas, standing at 21,247ft. “We had to abandon the expedition two days before the summit due to 72 hours continuous snowfall, making it impossible to proceed further. Three people from a different group were caught in a high camp and died on the mountain during this time.” Such dangers are ever-present in the Himalayas. The 2008 disaster on K2, the second highest peak in the world,  claimed the lives of 11 mountaineers in less than 48 hours.

Climbing so high in the Himalayas often involves a great deal of risk, and chance. “One day later and we could’ve been in serious trouble,” Søren recalls. “So much more rewarding was it when I made it to the summit two years later in good weather!” As a result, Mera peak holds a special place for Søren, and stands as one of many examples of the desire and fire needed when faced with the prospect of returning to face a peak after initial failure.

Knowing when to retreat and cede defeat is an important but often difficult decision to have to make. We may never know whether Mallory and Irvine reached the summit in 1924, or, whether they were attempting to descend in the face of mounting odds. An ice-axe belonging to Irvine was found high on the flanks of the north face of Everest, deepening the mystery. Clearly, the choice can sometimes be between life or death. During an attempt on Aconcagua, in Argentina, Søren faced a similar difficult decision. “Aconcagua is a very large mountain, and quite unforgiving. I failed to summit for two reasons.” Søren tells me. “I was not well prepared mentally, lots of work on my mind during the trip, which is not ideal when you need to focus on the mountain. I had also not previously had to carry heavy loads high up on a mountain.”

For many climbers, this transition from lower peaks where equipment and gear can be stored ahead of time to higher, longer and more strenuous routes can be make or break. “On Aconcagua you have to carry all your supplies, tents, fuel for the stoves, plus your own gear for the high camps. You end up with roughly 20kgs on your back, and when climbing at an altitude of 6000m, this is extremely tiring.” Søren says. “On summit day I turned around at 6,200m, exhausted physically, but more importantly, mentally.”

In 1921, the expedition marched over 300km’s from Darjeeling, India to the base of Everest, their route taking them from humid and wet lowlands and into the biting winds of the Himalaya. Everest’s remoteness added to its air of mystery. At the time of the expedition, the Kingdom of Nepal was closed to all foreigners, necessitating a far longer journey to survey the mountain. Today, organised treks to Everest base camp are becoming more widespread and popular thanks to modernisation within Nepal and the lower routes becoming more accessible. However, the number of people visiting the base camp has become a cause for concern in recent years, with overcrowding and over stretching of resources becoming common. The presence of relatively inexperienced climbers also poses questions of elitism. Should Everest be reserved for the most experienced of climbers?

“Everest Base Camp is quite commercial, but personally I don’t mind as I know what to expect,” Søren told me. “I am more concerned about the full Mount Everest expedition becoming more commercial as it is becoming quite dangerous with so many people on the mountain, especially at the Hillary Step – a serious bottle neck up and down.” There are a wide variety of operators developing new destinations and routes, but this gives rise to the fear that more and more people visit this unpredictable and dangerous environment. In 2015 a deadly earthquake struck Nepal, triggering an avalanche which struck Everest base camp. At least 17 people lost their lives, and the the early climbing season was aborted, something not enforced in 41 years. The previous season also witnessed disaster. In April 2014, 16 Sherpas were killed in an ice avalanche on the Khumbu Icefall. With the number of people on the mountain rising each year, the risks posed by these disasters grow alarming in scope.

The costs involved in undertaking an Everest climb may be the biggest hurdle many keen climbers face, towards of £30,000. The third British expedition in 1933 is estimated to have cost around £800,000 (adjusted for inflation), displaying the level of financial backing necessary for a major multi-team assault. “Everest will always remain a goal for me, but realistically I know I’ll never go,” Søren says. “It’s probably more of a dream than an actual goal.” Whilst modern transportation, communication and equipment has brought Everest far closer than for the early expeditions, the task remains colossal, even before stepping foot on the mountain.

Trekking and climbing, especially in high altitudes and in extreme and challenging conditions can take a huge toll on the human body. Altitude sickness can render climbers unable to ascend, or, more dangerously, descend. The levels of endurance and stamina needed necessitate a strict fitness regime in the run up to any expedition. “I try to keep a base fitness level, ie: being able to comfortably to run 4 miles.” Søren tells me. “The last 3 months before departure I intensify the training. I mix my training between spinning, cross-training and weights, for the core.”

“One must conquer, achieve, get to the top; one must know the end to be convinced that one can win the end.”

In stark contrast to contemporary documentation, images of Mallory and his expedition-mates show a rag-rag, heavily bearded band of men, pipes and cigarettes in hand. Although well supplied by their train of sherpas and mule-leaders, the team lacked the high-tech medical and fitness equipment that so many modern climbers now depend on. In 1921, Mallory and his comrades did not even carry oxygen canisters with them, something now agreed as being vital during high-altitude climbs.

We may never know exactly what George Mallory thought as he stood high above Khampa Dzong, gazing at the icy walls which would tragically claim his life three years later. Despite being unprepared, having marched through some of the most inhospitable terrain on the planet and facing the long march home, Mallory made an attempt on the summit, only to turn back when the team’s predicament became apparent.

He returned the following year, this time leading a more prepared, but equally unsuccessful attempt on the summit. The desire to conquer, achieve and tame that what seems impossible is evident in the images shown by the Royal Geographical Society. Perhaps the true answer to the question of why Everest and mountains in general hold such a prestige in our psyche, lies in that which Mallory famously gave prior to his death. Simply, “because it is there.”

Written by George Janes, images by Philip Janikowski. Others courtesy of the Royal Geographical Society.